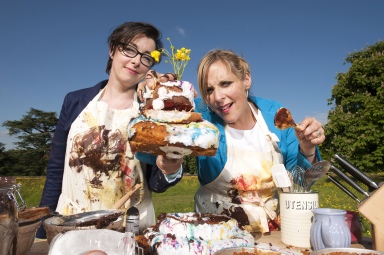 When it comes down to food, we live in the land of milk and honey. Never before has it been so abundant, so readily accessible – and so preoccupying. Food has always pervaded our social lives, but it’s now taken over realms not previously invaded. In the form of MasterChef and The Great British Bake Off, it’s on the TV more regularly than the ten o’clock news while celebrity chefs elevate cooking into an art form worthy of the Dutch Masters. Not that this is a problem. It’s enjoyable and, after all, relishing the act of eating is simply paying compliment to the huge diversity of our natural world and the great things that we can do with it when we try.

But our issue with food lies in the fact that we have a deeply paradoxical relationship with it. We deify and take great pleasure in food and we hold it in such high regard, but at the same time we act as if it is as disposable as used nappies. Every year the UK wastes 14.8 million tonnes of food. That’s a number too impossibly large to comprehend. Like Stalin said, “One death is a tragedy; one million is a statistic.” A quick back of the envelope calculation works out that, on average, we waste 230kg of food a year per person. That’s three times the average person’s body weight.

The huge amount of food thrown away every day was recently quantified by supermarket giant Tesco, in their first public report on the matter. They estimate that 32% of food is wasted along the value chain, the sequence of activities that a company performs in order to deliver their product to market. So almost one-third of all food grown isn’t eaten. And, according to their report, consumers waste 16% of the food produced for UK consumption, with another 16% loss due to the producers; interestingly, the retailers themselves waste less than 1%. A detailed examination of what exactly is being wasted reveals how serious the problem is. 40% of the total production of apples is unused; 47% for bakery; 68% for bagged salad. In each case, the largest proportion was due to the consumer.

We can’t afford to throw away so much food. Families waste £700 a year on binned food. According to the Food and Agriculture Organization (FAO), the price of cereals, central both to human diets and those of our livestock, tripled between 2000 and September 2012. Increasing food prices means more people struggling to eat – and prices only get worse if we throw away usable food. This year, according to The Trussell Trust, the number of people needing to use food banks in the UK tripled to 350,000. They pin the increase down to above-inflation food prices, as well as the current squeeze on benefits due to the global recession.

But unlike global food prices and international market stability, we, as individuals, can actually do something about how much food we throw away. Simple things, such as learning how to use leftover bread. Food often lasts much longer than the sell-by date, especially eggs and milk. Tesco is now starting a campaign to help its consumers reduce their food wastage, as well as buying less superfluous food in the first place. The sum of our actions counts towards something; every little helps.

Food security is often perceived as a problem confined to the developing world, where the struggle of subsistence farming persists. But in times of economic hardship, the developed world will increasingly suffer from rising food prices and food shortages. Changing our paradoxical approach to food is key to helping prevent this. We can be intelligent about how we treat food, and at the same time indulge ourselves with the next series of Hell’s Kitchen. All it takes is awareness.